While I love love love the holidays, I have always dreaded the New Year.

My New Year always involved another set of resolutions ... which for me meant one thing … losing weight at any cost.

As the New Year approached, I would do all I could to get psyched up to lose the weight, join Weight Watchers (for like the 10th time) and plan my extreme exercise regime.

Inevitably, the New Year would arrive and I would diet and exercise like gangbusters for the first week, lose the first 5 pounds …  and then very quickly peter out. All it would take was one stressful day at the office and I was tossing my salad, skipping my walk and reaching for the Doritos or ice cream (or both).

I would promise myself that I would start again next Monday after my January birthday cake (it was always a Monday) … and Monday would come and go and I found another excuse NOT to start again.

And then the "beating myself up" part would begin. Yes, Jenn, another year with another failed diet … and ten more pounds would very quickly creep on.

This same cycle happened every year for at least the past 20 years. The diet and exercise plans were different from year to year, but the end-result was always the same.

Damn, that is so crazy! 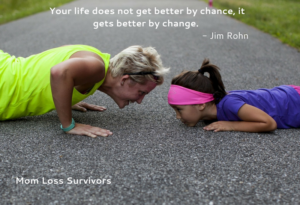 In December of 2016, I decided it was time to do the New Year differently.

That said, I decided to do two things:

1. Declare no resolutions of any kind.

2. Accept my body exactly as it is.

The ‘accepting my body’ one was easily stated but seemed impossible to actually wrap my arms around … especially after 20 years of punishing my body with diet and exercise. However, I decided on New Year’s Eve 2016 that I was going to let go of defining my self-worth by the weight listed on the scale. I was done, I was tired and for the first time in my life I saw the reflection in the mirror differently … for just a moment.

What I realized is that by holding on to this “ideal version of Jenn” I was in this never-ending cycle of feeling bad about myself.

When I finally had the courage to let go of the “ideal version of Jenn” … a whole bunch of new doors opened.

And I found yoga!

And the gift of yoga has truly changed my life.

I finally found a form of exercise and wellness that I not just liked, but LOVE.

In practicing yoga, I started to feel strong, tall and confident and, for the first time in my life, I couldn’t wait to go to an exercise class. I started to eat less too and feed my body with healthy food.

They say that yoga is a practice that involves and connects the mind, body and spirit and my mind and spirit also started to change.

I enjoyed the quiet reflection/meditation we did at the beginning and end of every class … as it forced me to calm my mind and focus on just one thing for several minutes … me.

My spirit was changing too … yoga taught me to accept and cherish and thank my body for all that it is.

And all this happened because I made a conscious choice to stop the New Year’s resolutions that inevitably made me feel bad about myself rather than positive … and by letting go of the body image I had in my mind of how I should look.

I am not saying that I always love the reflection staring back at me in the mirror. I’m not saying that the go-to of beating myself up doesn’t happen on occasion (it was a 20-year-old habit after all) but I work hard at recognizing when I go to that negative place and when I do, I force myself to look in the mirror and say 5 things I like about me … which usually changes my point of reference quickly.

As the holidays are upon us and New Year is just one short month away (yikes!), I am so grateful that I had the courage to let go of the “ideal Jenn” I had been holding on to for two decades and try something different.

And that has made all the difference.

Is there an ideal version of you … that perhaps is tearing you down rather than building you up?

Can you make a resolution for the New Year to let go of just one thing you have been holding on to … long enough to walk through the new doors that opened because you did?

Don’t we all deserve that? 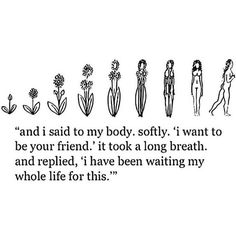