Losing Mom so early in life affected me in many ways … and many of which have carried with me into adulthood.

One, in particular, sticks out for me this week … and that is my “stuckness”.

Frankly, I am not even sure if “stuckness” is a word, but I am defining it as my aversion to change.

Maybe because my teenage life changed so fast and with no warning or control after Mom died … I craved control because it gave me back some power. Unfortunately though, control leads to stuckness … or at least is has for me. Control means that I can continue to hide (just like I shared in last week’s blog post), not face what is really going on and find every excuse to NEVER make a change.

By the time I had moved to adulthood, my stuckness (aversion to change) was mastered.

Stuckness showed up in my relationships … in the form of not being able to say what I want or need in the relationship ... like ever.

My stuckness allowed people in just so far … and when I would feel the control slipping away … I pull back and push them away. After all, they wouldn’t want to see the real me, right? Because if they did, I would no longer be able to keep up the illusion that I have it altogether.

Recently, I read a book called “The 5-Second Rule” by Mel Robbins. In the book, Mel explains that you are just five seconds away from making a change. Literally, counting down from 5 … and when you get to 1 … you act. Sounds so simple right? Seriously, my first thought was that this is crazy and would never work. Ok, well, maybe it would work for other people but certainly not me. I was ready to just put the book down at this point but I was reading it as a commitment with a very special group of people where we were asked to discuss it … so begrudgingly, I knew I had to continue.

Since I knew I had to read the book in its entirety, I decided to test this theory and start with something I had been struggling with for YEARS … the snooze button. I have been pressing the snooze button multiple times each morning and dragging myself out of bed for at least twenty years. I would marvel at people who heard the alarm, shut it off, and promptly got up. Or worse yet, people who didn’t even NEED an alarm and just woke up naturally … how the hell is that even possible???

Fast forward to Day 1 of my test. 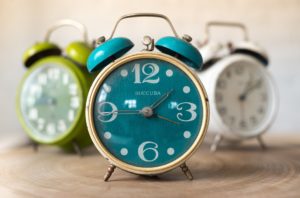 The clock radio starts singing country music at 4:50am … I open one eye and think “Shit, today is the first day of the test and I CANNOT touch the snooze”.

I closed the one eye and decided that I would handle this like I handle my diets … starting TOMORROW. I press the snooze and try to nestle back under the covers. But … I cannot sleep.

What the heck??? I keep thinking about the whole 5,4,3,2,1 thing and how I made a commitment and, if I can’t do this one simple thing, how can I make any other changes? Damn.

I get out of bed … turn off the radio and start the getting ready process.

Usually, when I am getting ready for the day, I am slogging along and thinking about all the things I am dreading for the day (the long commute, traffic, the endless incoming emails, my to-do list, and oftentimes feeling overwhelmed).

But this day was different.

I’m not sure if it was the fact that I actually got out of bed twenty minutes early and wasn’t rushing around like a crazy person or maybe, just maybe this whole 5 second thing actually had some validity. Instead of the dread ... I felt a bit lighter somehow and found myself humming while I was getting ready … something I also hadn’t done in years.

On the way into work, the traffic was lighter and I found myself looking around and appreciating the beautiful morning instead of being angry that other commuters weren’t driving fast enough. The day itself, felt different too. I felt like I had opened up somehow and was a bit more patient with all that crossed my desk.

This can’t be all related to one simple rule where you count back from 5, could it?

So I decided that I would try it again tomorrow.

The following morning, country radio started again at 4:50am and this time I opened both eyes, got my bearings, and started counting. 5, 4, 3, 2, 1. By the time I hit 2, I was sitting up with my feet on the floor and at 1, I was reaching to turn off the radio. I stood up and decided that I was going to leave the radio on while I prepared for the day. I did it … I actually got out of bed without pressing the snooze … not even once!!!

So, I decided that since this was a success, perhaps I could try the rule on something bigger. The next time I had something I wanted to say (but would usually hold back because my thought may not have any validity, could make someone uncomfortable, or was just plain vulnerable), I started counting again. 5, 4, 3, 2, 1. My counting was a bit quicker this time but by the time I got to 1, I opened my mouth and started speaking. Truth be told, I was just voicing my opinion about what I would like to do that particular Saturday night. You may be thinking, “Well, that’s no big deal”, but for this lifetime, card carrying people pleaser, it was a HUGE deal.

It worked again! And, I also ended up spending a Saturday night doing something that I had been wanting to do for a long time.

In the weeks and months that followed I have used the 5 Second Rule countless times and for all sorts of difficult conversations … like asking for what I want and what I need, getting up and going to yoga class, writing this blog, telling someone I care about them, saying “no”, reaching out to say I am sorry and in many, many other situations.

Who knew that counting back from 5 could help my “stuckness” in such a profound way?

Maybe the point is that change really isn’t so bad and can actually be quite freeing. Maybe change is one of those things that gets easier each time I bravely take a chance and speak. Maybe its ok that change doesn’t happen overnight and what really matters is that I keep trying.

Maybe becoming unstuck can lead to all the beautiful things that life has to offer … and for that, I am so very grateful. 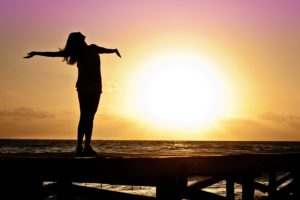