Shortly after I was adopted, Mom and Dad applied for a second child. Three years later, we were blessed as a family with the gift of Chris. According to Mom and Dad, I immediately went into Big Sister mode. There is a story that Dad tells where I am playing in the yard and invite the neighbors to ‘come and see my baby brother’ to anyone who was interested. I loved him from the moment they took him home from the adoption agency.

As we got older, he would play Barbies, and house and have a tea parties with me and I would play Matchbox cars with him. One year I told Mom and Dad that ‘girls like Matchbox cars too’ so I could have my own and be closer to Chris.

For Christmas, we each received some of our own gifts but were also given a combined gift that we would play together. One of my favorites was an actual bridge of the Star Trek Enterprise … complete with Barbie-like dolls of Captain Kirk, Scottie, Mr. Spock, McCoy and Uhura. Chris and I would play with this for hours at a time, replicating scenes from the tv show we would watch with Dad on the few nights a week when Mom worked and Dad was in charge of making us dinner.

One of my other favorite gifts that Chris received was his Super Duper Double Looper race car set. This set had electric cars and they would speed up the wall, go into a full loop and race to the finish.

I also loved the summer nights, after Dad had just mowed the grass and we played catch in the backyard. When we were a bit older, we could go in the front yard and would each stand on one side of the street and toss the ball back and forth. Often times Dad would join us and we would practice “pop-ups” and ‘grounders' for hours.

Chris taught me how to ride a skateboard (something he excelled at and I did not) and he let me ride his Green Machine on occasion (a Big Wheel on steroids of sorts) and spin out in the driveway until we did it too many times and the plastic tire flattened. We rode our bikes much farther from home than we should have. We played until the streetlights came on or were called inside by Mom or Dad. I loved those years and love recalling them as an adult. Yes, I was the Big Sister … but we were pals.

Unfortunately, Chris was only 10 when Mom died and after she was gone so suddenly our relationship changed. I immediately took on a Mom role with him and worried for years about how he was. Did he miss her the way I did, did he cry at night like I did, did he wish he could just end it all and go be with her too? I became hyper-focused on taking care of him and the worry was intense.

I shared in a recent blog post that as a family we didn’t talk about Mom after she died … we just kept going. There was a gaping hole in our family, in our lives and in our hearts … but we just kept going. Chris and I stopped playing together and I missed that terribly. In the teenage and young adult years that followed, I felt like I was always wanting him to talk about how he felt, to let me into his life again … like we were when we were kids. It’s taken me all the years to figure out that maybe he couldn’t. Our roles in the family had changed so much, I was no longer his playmate, I was the worrier.

Thankfully, our relationship as adults has been different. Chris moved out when he was 19 and it was then that things started to change. I finally started to live my life and he did too. I worried less because he physically wasn’t there and I had to just trust that he was okay and happy. It didn’t take the worry away but it definitely lessened. 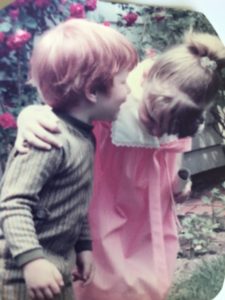 Recently, I have found that in going through my own Mom Loss journey, our relationship has changed yet again.

As adults now in our 40’s, our relationship has become a friendship and

I have moved away from the Big Sister role and he sometimes is a Big Brother-like role. He is strong in areas (like technology) where I am weak, he has a steadfast calmness about him … when I am emotional and just need some brotherly advice, he is incredibly smart and is always willing to jump in and show me how to do something I may not know. He is thoughtfully deep and insightful and I am totally in awe of that.

We are finally talking about Mom again, looking through old photos, remembering her and all that she was in our lives … even though our time was cut so short. We are talking about how we all changed, how we felt then and now.

He no longer needs protecting, he no longer needs me to be the Mom (perhaps he never did and that was part of the problem). He just needs his sister and I need my brother. He has carried me at times when he didn’t even know he did, just knowing he was there has saved me on more than one occasion.

Together, Chris and I have come full circle … and I am forever grateful for that.

Thank you so much for being a part of my journey, do you have a story about your siblings and how the relationship changed after your Mom died? I would love to hear your story in the comments below. 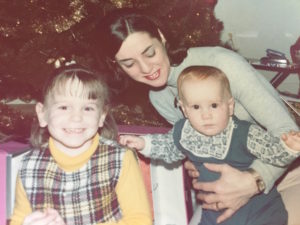 MLS P.S. My Big Sister story doesn’t end here, there is a very special second half to the story which I will share in next week’s post … so please come back.