The Mother Tree and Her Daughters …

By the time I was 23, I was struggling mightily.

Most of friends had graduated college at this point, were starting their respective careers, and dreaming about their Cinderella weddings … just waiting for their prince to find them. I, on the other hand, had dropped out of college just two years prior, was working three partime jobs and living at home. My dream of helping people by becoming a social worker had died the day I decided to stop going to classes and I had no idea what I wanted to do with the rest of my life. If all of this weren’t enough, it was also at this time when I started to question my own sexuality. And … this was also the year I met my biological Mom (a story for another blog post).

And … the most resounding memory I have in my 23rd year was this profound missing of my Mom.

I needed her now, I had so many questions about life and about myself that I felt only she could answer. As my friends were finally moving to a place where they were seeing their Mom as a friend and confidant, I was yet again alone. It was the knowing that I would never have the joy of that kind of friendship with Mom that was the hardest, and felt as if she died all over again. I knew in the years to come, my friends would start planning their weddings, and later on, have children and their Moms would be present for all these important events … and all I had was the missing of mine.

This same year, my biological Mom gave me a book, called Motherless Daughters by Hope Edelman. The title of the book intrigued me and I remember reading the first chapter one particularly lonely evening on my bed in my parent’s house. As I laid there reading for hours, I remember thinking it was as if Hope was speaking to me … just me. She too had lost her Mom as a teenager and seemed to have the same struggles I did … and for the first time since my Mom died, I felt slightly less alone. I combed through the book, dog-eared so many pages and raced to get to the end in hopes of feeling better.

As with most books I had read up until this point, the end of the book is where it the story wraps up and comes to a conclusion (sort of like the fairy tale I had always wanted) but this book was different. The last chapter of the book was the hardest to read and the most profound and life changing for me. In the last chapter, Hope talks about visiting Muir Woods on the California coast, a place where her Mom had gone and told her the story of the Redwood trees in the forest.

The story of the Redwood trees is that they grow in clusters, called a family circle. In this family circle there is a burned out trunk with a circle of healthy trees surrounding it … this is referred to as the mother tree and her daughters. When the mother tree is damaged or blown over, it creates burls in the ground which sprout around her to form new trees (the daughters).

As Hope Edelman so eloquently writes: ‘The seeds release, and the trees sprout around her, creating the circle of daughters. The daughter trees grow by absorbing the sunlight their mother cedes to them when she dies. And they get the moisture and nutrients they need from their mother’s root system., which remains intact underground even after her leaves die. Although the daughters exist independently of their mother above ground, they continue to draw sustenance from her underneath.’

This last page of the book spoke to me like nothing I had heard since Mom had died. It put it in perspective for me, it gave me hope and gave me something to hold on to.

I have moved several times since my early 20s and this book has followed me to each new home. I have reread this chapter hundreds of times over the years, most often when I felt alone.

In 2010, I took a trip to the California coast and insisted that Muir Woods be on the itinerary. I was so excited to go and even carried the book with me in my suitcase and to the park that day.

It was a very cool and damp day in mid-May (strikingly similar to the day Mom died all those years ago). I remember walking the long path from the parking lot to the edge of the forest, with my book under my arm and thinking how painfully quiet it was as the only sound I heard was the crunch of my sneakers on the path as I walked.

I had studied the park map and knew exactly which path to take to get to the family circle of trees. The forest was dark and damp and silent but in a comforting sort of way. A cool breeze kissed my cheek as I walked. And then … I saw them. The trees were just as Hope had described, a circle of huge healthy Redwoods and, in the center, was a burned out stump.

I stood there in the cool, damp silence, opened my book and read the last chapter again. My eyes teared up as I came to the story of the trees and the tears fell down my cheeks. But … for the first time, in what seemed like forever, I did not feel sadness. A feeling of calm peace came over me and I could feel Mom there.

After I finished reading, I stared at the burned-out stump in the center for what seemed like a long time.

The stump looked somewhat odd against the healthy trees surrounding it. But I guess that’s the point.

Maybe, in some way, she did have to die so I could have life. Maybe she does live on in everything I am, everything I do and everything I want to be in the future. Maybe she still carries me when I can’t, holds me in her arms, calms my fears and loves me no matter what.

I choose to believe that ... 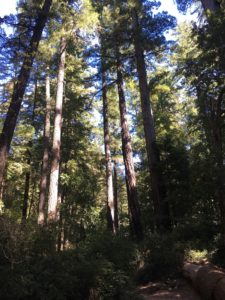 P.S. Thank you so much for reading!!! Do you have a similar story? Has there been a book, a person or an experience that has given you comfort, helped you feel less alone or changed you in some way on your Mom Loss journey? I would love to hear your thoughts in the comments below and please come back as I share more of my story in the weeks to come.